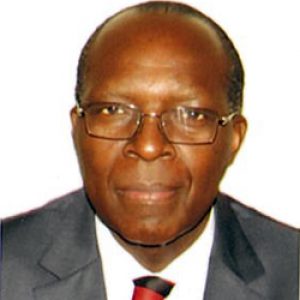 Hon. Justice (Prof) Jackton B. Ojwang, was appointed Chairman of EPRA’s Board of Directors for a four-year term with effect from 12th May 2020. Prof. Ojwang is a retired judge of the Supreme Court of Kenya with a span of 45 years’ experience in the legal profession.

Prof. Ojwang’ has had an illustrious 17-year career in the Judiciary after having been first appointed a high court Judge in 2003 and then elevated to the Supreme Court in 2011 as one of the key seven Judges of the newly created apex court.

Prof. Ojwang’ was awarded the University of Nairobi’s Staff Merit Award in recognition of his outstanding contribution towards the University’s mission. He was also bestowed the coveted East African Law Society Senior Lawyer of Year Award in 2013 for his remarkable legal and judicial career. up to February 2020, he sat on the Council of Legal Education Board where he chairs the Quality Assurance & Compliance Committee.